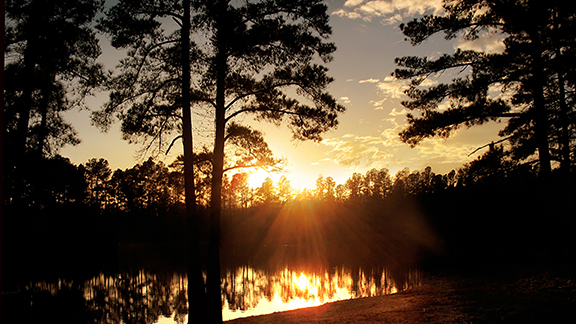 Thad Eure, Jr. and Charles Winston’s initial tract of 50 acres of unspoiled woodlands, bluffs and pasture in 1959 for their rural steakhouse became an unmapped trove of treasures only recently discovered by Van and her husband, Steve Thanhauser.

As a child, Van wiled away countless hours by the lake with her brother and sister while their parents tended the restaurant.

In the 1970s, as Darryl’s restaurants sprang up across North Carolina, four storage sheds were constructed near the lake to house artifacts and antiques collected by Thad for his new restaurants. Treasures such as double-decker bussed and old wagon wheels jammed every square inch of storage space. Darryl’s restaurants were famous for eclectic decor and as the chain of restaurants grew, so did the volume of stored antique treasures. Materials used to build the sheds seemed insignificant as well as other discarded materials that lay buried on this rural property. Time and the expansion of the Angus Barn soon revealed history that predated the restaurant by hundreds of years.

In the late 1990s, as Van and Steve watched salmon-colored sunsets by the lake, discussing the perfection of the topography, the idea of an open-air dining/event facility that embraced such natural splendor took root. They felt that the Triangle area offered many fine dining options but none with such a spectacular setting amid majestic pine, beech and oak trees. Bordered by William B. Umstead State Park and Highway 70, this private parcel of land that lay undeveloped for hundreds of years would become the next chapter in Angus Barn history.

Spared by Sherman's Army
As interest grew, plans to remove the contents of the storage sheds and to tear them down unfolded quickly. Well-known advocates of recycling, Van and Steve called in a historic engineer who specialized in identifying and salvaging reclaimed materials to implement in new buildings. As the engineer examined the sheds’ trusses covered in soot and black oil, he knew within a minute that these were no ordinary 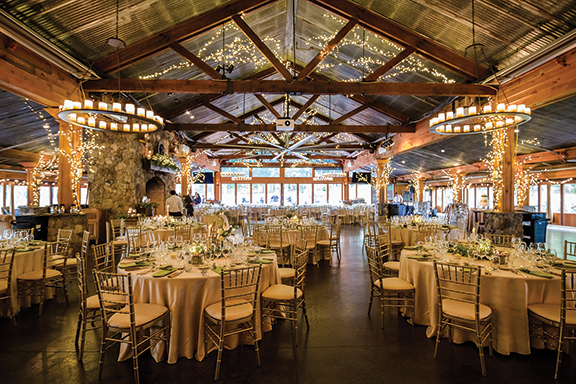 trusses! These were King rod trusses named after the three vertical iron rods that ran through each one. They were made from 400-year-old heart pine and estimated to be built between 1856 and 1861. They were used as ammunition storage sheds for confederate soldiers during the Civil War somewhere between Charleston, South Carolina and Savannah, Georgia. What made the trusses even more noteworthy is that they were not burned and destroyed by Sherman’s Army in 1864 as it marched to Atlanta, obliterating everything in its path. The trusses played a major role in preserving Thad’s vast collections of antiquities and thankfully, they survived to help create a new venue at the Angus Barn history: The Pavilion.

17th Century Europe Meets 21st Century Pavilion
In 2004, Van and her siblings dedicated 115 acres of property to William B. Umstead State Park for preservation. As design plans for The Pavilion materialized in 2005, Van recollected that somewhere on the property her grandfather, the late North Carolina Secretary of State Thad Eure, Sr., had salvaged cobblestones originally used on Fayetteville Street in downtown Raleigh in the 1700s. When plans moved forward to pave Fayetteville Street as well as other downtown streets in the early 1960s, Eure offered the back 100 acres of Angus Barn property for disposal of the cobblestones. Over the years, however, the mound of stones was left unattended and almost forgotten. In 2005, hours of hunting paid off when Steve stuck his shovel in a hill of dirt covered with weeds and pine seedlings. Beneath the mound lay the buried treasure that would bridge the past with the future as Van and Steve built The Pavilion. 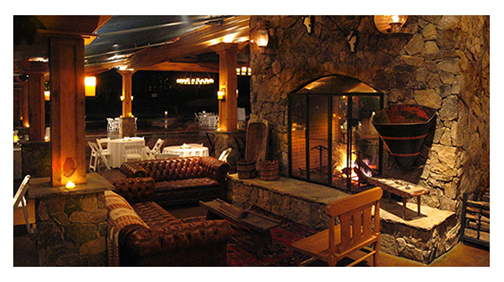 Perhaps the most unexpected clue to the origins of the cobblestones came in 2009 while Van and Steve engaged Angus Barn co-founder Charles Winston in conversation at a Pavilion event. To their surprise, Winston revealed that the cobblestones once lay in the ballast of English ships bound for the colonies in the 1600s. Once more, relics of the distant past shaped the future of the Angus Barn, thanks to the late Secretary Eure!

Take the antique riddling racks, for example. This antique played a critical role in the aging of champagne in France hundreds of years ago. Before corking, bottles were stored upside down to allow sediment to settle in the neck. The racks were used on ships to transport wine and champagne to the United States along with workers known as riddlers. Riddlers would turn each bottle one quarter of a turn each day in order to allow further fermentation inside each bottle. Today, the riddling racks adorn the walls of The Pavilion, reminding us of their traditional use and changing purposes.

Keeping "Big Ass" Cool
As you look up at the ceiling of The Pavilion, you might giggle or grimace reading the brand name of that gargantuan fan in the center. While traveling a few years ago, Van, Steve and their children looked up in an airport hangar, cackling at the imprint on one half of a 21-foot blade span that read “Big Ass Fan.” This was a must-have for The Pavilion. Imagine the bewildered looks on the faces of Angus Barn guests prior to its installation as Van and Steve’s son, Christopher, constantly asked, “So when is that Big Ass Fan coming?” As you might imagine, such dimension creates velocity: At full speed, the Big Ass Fan produces air circulation that would rival the velocity created by a small helicopter! 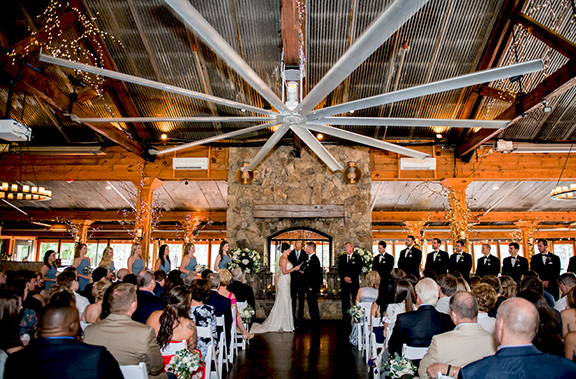 Raleigh area residents may remember the downtown Sir Walter Raleigh hotel built in 1923. At one time, it is estimated that 80% of North Carolina’s legislators lived in this building that is now a Raleigh Historic Landmark. When you’re walking up or down the marble steps of the amphitheater near the lake at The Pavilion, you’re treading steps from North Carolina’s glorious past that once belonged to the Sir Walter Hotel. And don’t forget that bathtub! Identities of hotel guests who once bathed in the tub at the Sir Walter may never be known but its new home by the amphitheater ensures that it will never again be as private as its past.

The Pavilion seats 350 with additional space for 150 on the enclosable patio which can be quickly tented. Perhaps no other Raleigh area dining and event facility has a structure more adaptable to changing weather. It takes a mere 12 minutes to slide the removable walls of glass and cedar away and create a beautiful, open-air setting. If cold weather calls for a toasty environment, warm yourself inside by the sky-scraping fireplace so tall that a person measuring 6’2” could stand in it. Reminiscent of the towering fireplaces at The Grove Park Inn in Asheville, Van and Steve originally planned a larger fireplace but decided to reduce the scale to allow the historic Grove Park Inn its claim to have the largest wood-burning fireplaces of any in North Carolina. In addition to the eye-grabbing fireplace, heating units are recessed in the roof of The Pavilion and can quickly transform the room into a comforting cocoon to combat fall and winter temperatures. No matter what the season, this year-round facility combines the rustic elegance of a big national park lodge with the historic charm of the Angus Barn.

Making Your Own History at The Lakeside Pavilion
In addition to private business conferences, fund raising events, celebratory dinners and company picnics, The Pavilion is perfectly suited for weddings and receptions. Nuptials are exchanged lakeside with seating for 300 in the flat, bricked concourse beside The Pavilion. Inside The Pavilion, a bride’s room featuring full-length mirrors from bygone Darryl’s restaurants, dazzling chandeliers and Shelley Eure Belk’s decorative touch surrounds every wife-to-be in a fairytale-like setting. Across the hall is the groom’s room with rustic trappings in leather, wood and brass, all lovingly decorated by Shelley. Van says, “Our mother was the most gifted decorator. After she passed, it was as though her talent somehow drifted down from above and became part of Shelley.”

For recreation-minded guests, underneath your feet are 20+ acres to explore that include Christopher’s Trail, a one-mile hiking course around the lake created by Van and her son Chris. The trail is used annually for the Walk For Hope to raise awareness and funds for mental illness research and treatment. Got a hankering for competitive outdoor bowling? Try the boccie (“BOT-chee”) ball court beside the Pavilion. The game that originated in the time of the Roman Empire requires 2, 4 or 8 players. If you’re anxious to learn a new sport, we’re anxious to teach you this ancient game!

For all the historic accouterments and 50 years of Angus Barn folklore that surround you, once you’re at The Pavilion, your nose and your taste buds sense “Iron Chef America” champion Chef Walter Royal’s culinary magic. Is there anything more irresistible than the breeze by the lake wafting the scent of aged tenderloin as it slowly grills or the deep ruby color of the perfectly matched California claret in hand as you welcome guests to your special event? Every dish at your event is expertly prepped in the Angus Barn kitchen by our award-winning culinary team. Dishes are finished and plated at action stations in The Pavilion kitchen and its outdoor grilling stations. In every sense, The Pavilion is an extension of The Angus Barn.

Steve, your chief host for all things Pavilion, comments, “Whatever the event, whether your occasion calls for tuxedos or tee-shirts, formality or fun, indoor or outdoor, The Pavilion combines versatility with that incomparable hospitality that Thad Eure, Jr., started 50 years ago.” If your event needs to uniquely memorable, you’ll find The Pavilion to be the perfect place. After all, where else can you dine by candlelight and moonlight at the same time?